Another Rutgers Classics first. Fourth year graduate student Liz Gloyn has been selected by Rutgers University—Newark as a member of its inaugural class of Rutgers Scholar-Teachers for 2008-2009.

The Scholar-Teachers program was developed to place some of the very best advanced doctoral students in the Humanities at Rutgers’ New Brunswick campus in classrooms in Newark. Gloyn’s appointment is in Classics, which at Newark is administered by the Department of History. There Gloyn will teach a combination of introductory and elective courses in the field.

Liz Gloyn, a native of London, received her first two degrees (BA. M.Phil) from Cambridge University (Newnham College) in Classics. She is writing a dissertation on views of the family in Hellenistic philosophy under the direction of Professor Leah Kronenberg. This May, at the Ann Arbor Feminism and Classics V conference, Liz presented a paper on the depiction of freedwomen at Trimalchio’s dinner party in Petronius’ Satyricon. 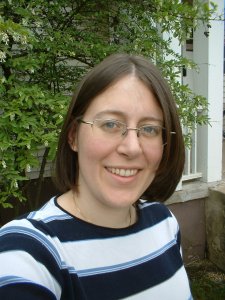 One response to “Rutgers—Newark chooses Gloyn for new program”