Walter Hamilton Seward (1896-2008), RC’17, was oldest graduate of university and its Classical Course

He knew Rutgers at a time when ancient Greek was compulsory for the AB degree. When undergrads climbed the steps to the top floor of Old Queens to study Latin with William Hamilton “Poppy” Kirk (trained at Hopkins by Gildersleeve), and learned constitutional law from Austin “Scotty” Scott (a student at Berlin of Mommsen, Droysen and Curtius who went on to hold the Rutgers presidency). When juniors and seniors took Roman Law as a two year sequence. When Classics students had pride of place during services at Kirkpatrick Chapel, sitting in reserved front pews. (Ag students had to worship from the very back.) When the reigning version of “On the Banks of the Old Raritan” was the one the Peerless Quartet cut for Columbia in 1915. (Listen here.)

Walter H. Seward was the oldest alumnus of Rutgers College—and its rigorous Classical Course that essentially defined the undergraduate liberal arts experience in New Brunswick from 1771 through 1924. He died on 14 September 2008 at the age of 111. Seward at the time of his death had the distinction of being the third oldest male in the United States, and the sixth oldest in the world. He practiced law in New Jersey into his 90s.

Rick Malwitz of Gannett NJ reports : “Seward was born Oct. 13, 1896, and raised in Toledo, Ohio. He and his family moved to Vineland [NJ] when he was a child. Seward was a member of the Rutgers Class of 1917, living in the same dorm as Paul Robeson, an All-America football player and civil rights activist. Seward served as a water boy for the football team. [He did however manage to play in one game, as right guard, for a single down—Ed]. In addition to being the oldest alumnus of Rutgers, he was the oldest living graduate of Harvard Law School [class of 1924] at the time of his death.”

Mark Mueller in the Newark-based Star-Ledger offers a superb longer obituary. Seward himself spoke of his Rutgers Classics classroom experiences in great detail in a 1996 oral history interview conducted by the RU-New Brunswick History Department Oral History Archives of WW II. Articles of recent years in Rutgers’ Daily Targum and the Harvard Gazette shed further light on Seward’s student experiences and beyond. “I didn’t think they were ‘Roaring'”, said Seward of the 1920s. “I thought they were preposterous.” END_OF_DOCUMENT_TOKEN_TO_BE_REPLACED 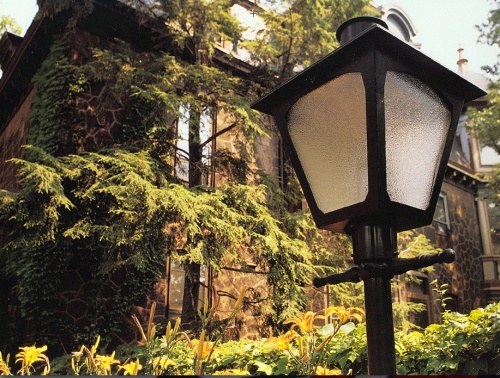 College Hall on the Douglass campus of Rutgers, steps from RU Classics

There’s so much new afoot at Rutgers Classics that a September 1st summary seems in order.

Let’s start with the faculty and staff…

Associate professor Corey Brennan is new (sort of) at Acting Chair. He served two terms as Chair of the department (2002-2008), and returns also for 2008/9 in the position. This fall Brennan teaches an undergraduate lecture course in Roman Civilization.

Serena Connolly came to Rutgers in 2007/8 as a visiting assistant professor, after three years of full-time teaching at Yale. She now holds a tenure-track appointment, and is the department’s new Graduate Director. Connolly’s courses this fall are Sallust for advanced Latin undergraduates, and a graduate seminar on Rome in the Age of Augustus.

New assistant professor Timothy Power joins the Rutgers faculty from the University of Washington, where he had taught since 2001. This semester at RU he teaches intermediate Greek prose and an undergraduate lecture course in Greek Civilization. Power also assumes the duties of Acting Undergraduate Director. That is because…

Assistant professor Leah Kronenberg, who is the department’s Undergraduate Director, starts the second year of a two-year competitive research leave, funded by the American Council of Learned Societies (07/08) and the Harvard Loeb Classical Library Foundation (08/09). Kronenberg is in the midst of a new book-length project entitled Gods and Monsters: Roman Representations of Epicureanism. Her first book, Fables of Farming from Greece and Rome, is forthcoming from Cambridge University Press/UK.

Professor (II) Thomas J. Figueira in 2009 will see his 30th year teaching in Classics and History at Rutgers. This fall he offers intermediate Latin prose and (for the History Department) an undergraduate lecture course on Ancient Greece. Figueira also starts a term on the Rutgers University Senate as a faculty representative of the School of Arts and Sciences—New Brunswick.

Emily Allen has taught various courses at Rutgers in Greek prose and verse, as well as a lecture course on the epic hero. Allen is on leave this year—among other things, she will travel to Paris to finish her Harvard/Sorbonne doctoral co-tutelage requirements—but starts at Rutgers Classics in September 2009 as a tenure-track assistant professor.

Visiting assistant professor Matt Fox (not pictured above) is the former Robert B. Aird Chair in the Humanities at Deep Springs College (California). This coming year is the second in Fox’s two-year appointment at Rutgers Classics as a visiting assistant professor. For the fall he teaches Elementary Greek, and undergraduate lecture courses in Greek & Roman Mythology as well as Roman Drama in Translation. Fox also will coordinate the department’s introductory Latin program. That features as Teaching Assistants RU Classics graduate students Andriy Fomin, Charles George, Benjamin Hicks (Head TA), Rachel Loer, and Lisa Whitlatch, each offering his or her own class section in the language.

And that’s just half the story… END_OF_DOCUMENT_TOKEN_TO_BE_REPLACED