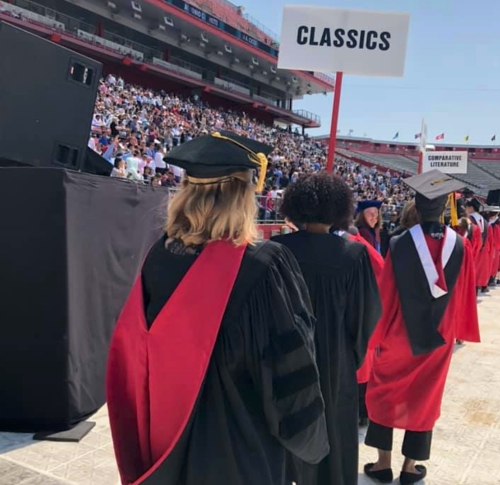 This past Sunday (19 May), Rutgers’ HighPoint.com Stadium was the sun-drenched venue for the University’s 253rd commencement exercises. Fully 18,825 candidates received undergraduate or graduate degrees, making the Class of 2019 the University’s largest ever.

Plus Kathleen Carmien, Max Duboff, and Emily Ezzo received Honors for their work in the Classics major. 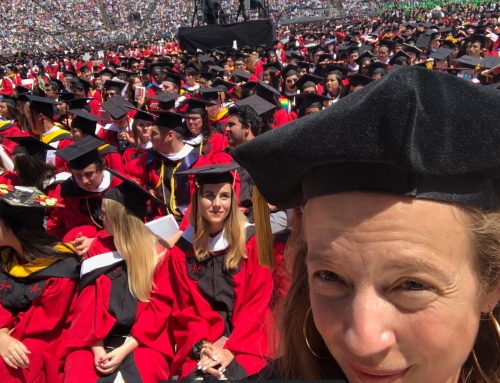 The oceanic crowd of Rutgers graduates in HighPoint.com Stadium, as seen from the camera of Professor Emily Allen-Hornblower (at right) 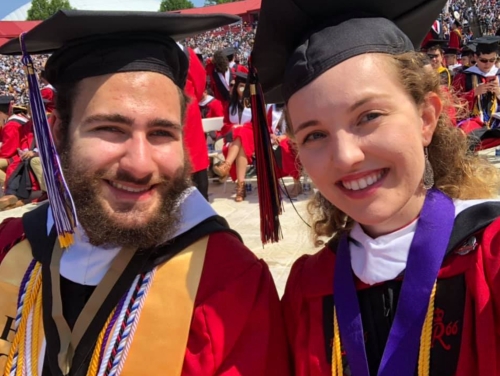 At the University-wide convocation, President Robert L. Barchi honored the memory of actor, singer, political activist and Classics scholar Paul Robeson, valedictorian of Rutgers’ Class of 1919. This year, all School of Arts and Sciences students completing Honors theses were designated as Paul Robeson Scholars; in Classics, this centennial distinction (represented by special pins for graduation regalia) was awarded to Max Duboff and Emily Ezzo.

President Barchi also conferred Doctor of Humane Letters degrees on twin New England Patriots defensive backs (and Super Bowl LIII champions) Devin McCourty ’10 and Jason McCourty ’09, citing their philanthropic and educational advocacy work, especially their Tackle Sickle Cell initiative that has raised over $1 million to date. In their joint address, the McCourty twins paid special homage to their mother Phyllis Harrell, who raised them alone following the death of their father when they were age three, and surmounted numerous additional challenges including a serious on-the-job car accident. You can watch the twins’ entire address here. 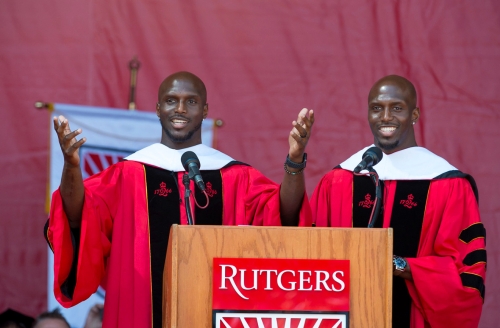 Rutgers Classics also saw its largest PhD class in some years, with three students—Brian Hill, Ella Wallace, and David Wright—earning their doctoral hood at the second-ever convocation of the new School of Graduate Studies, held at the Rutgers Athletic Center on Friday 17 May. Professor Leah Kronenberg—a long-time Rutgers Classics faculty member, now at Boston University—had directed the dissertation of each. 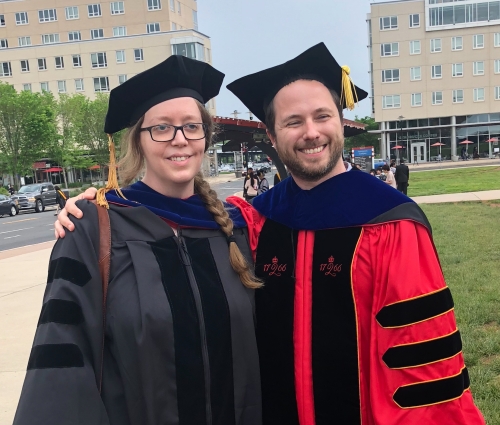 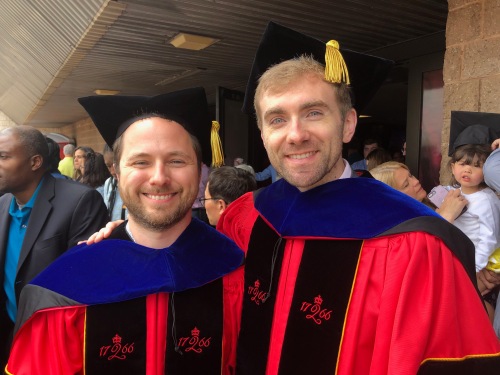 As it happens, the Classics end-of-year celebrations had started rolling almost two weeks previous, at the Dean’s Residence at Rutgers’ Douglass Residential College. On Tuesday 7 May, Associate Professor and Undergraduate Director Emily Allen-Hornblower officiated at a lively symposium of undergraduate students, their parents and families, graduate students, and faculty. 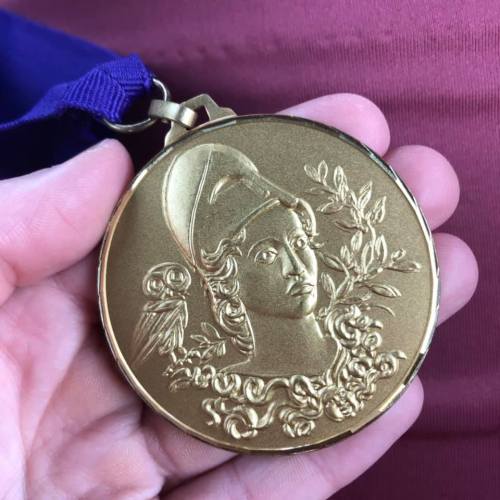 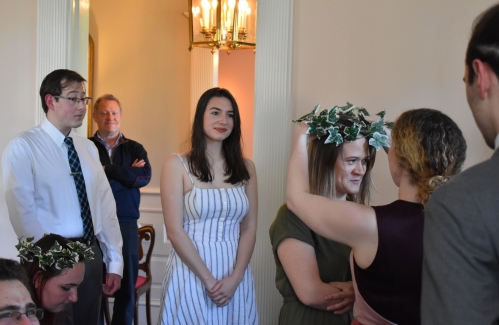 “It’s a joy to be a Classics professor”, Professor Allen-Hornblower told the overflow audience at the Douglass event, “not just because we all share a deep passion for what we are learning or teaching—and those of us teaching are always learning from our students—but because it brings together a small community of students whom we really get to know very well, and whom we follow as they jump through the demanding hoops” that lead to their Classics degrees. 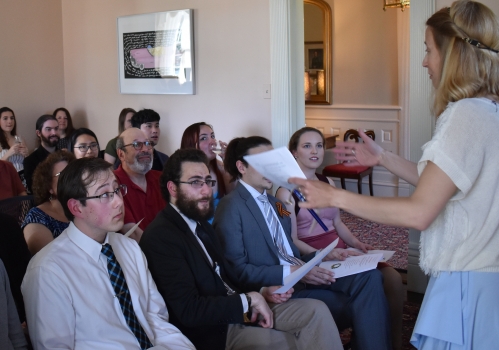 Then there are the extra hoops, of academic prizes and distinctions. Professor Allen-Hornblower summarized some of the Rutgers Classics highlights for 2018-2019:

Kathleen Carmien ’19 won both the Department’s annual Classics prizes, the Brodhead and the Cornelison, which recognize one student each year for all-around excellence in Classics. The first is awarded from a fund given by Reverend Jacob Brodhead, D.D., and his son J. Romyn Brodhead, LL.D., to an outstanding junior or senior; the second from a fund given by Mrs. Alice L. Cornelison to the Associated Alumnae of Douglass College in 1964, to a student of Douglass Residential College. 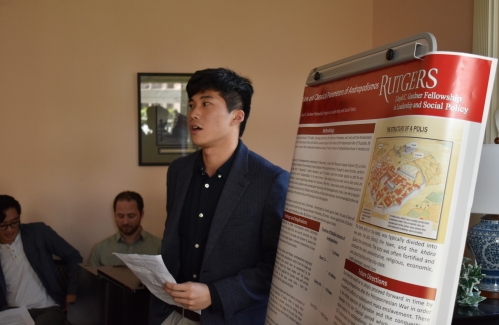 Junior Jonas Tai shares some of the research from his 2018-9 Lloyd C. Gardner Fellowship in Leadership and Social Policy thesis project

But there’s more. Jonas Tai ’20 also received Rutgers’ Lloyd C. Gardner Fellowship in Leadership and Social Policy for this past academic year. The Gardner Fellowship is a program that selects about a dozen School of Arts & Sciences juniors each year to study social policy issues from a multi-disciplinary perspective. It culminates in a semester-long research project. Classics major Max Duboff ’19 was a Gardner Fellow in 2017-8, and Michael Antosiewicz ’18 in 2016-7. 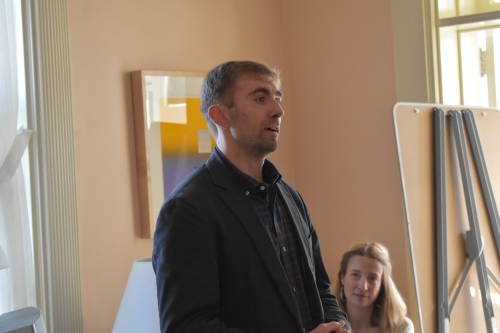 Professor Allen-Hornblower then noted recipients of the Classics Department’s competitive Ethel S. Cook summer travel and study award, and their plans for summer 2019: Cecilia Huang ’20 (CUNY Latin/Greek Institute) and Jonas Tai ’20 (participation in the 2019 Celtic Conference in Classics in Coimbra [Portugal], followed by study of Byzantine Greek at Boğaziçi University in Istanbul and at Trinity College Dublin). 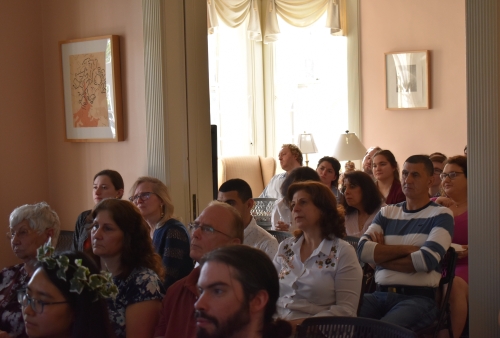 The capacity audience at the 7 May Classics departmental celebration at the Dean’s House, Douglass Residential Campus

Attending the Rutgers University Archaeological Field School in Vacone (Lazio) Italy will be Classics major (with History) Elias Attal ’20 and Classics minor Catriona McCormack ’20. And Eric Silver ’20 will be participating in the Calder Classics program in Tuscany titled “Journeys to the Underworld,” a 10-day course focused on Odyssey Book 11 and Aeneid Book 6. 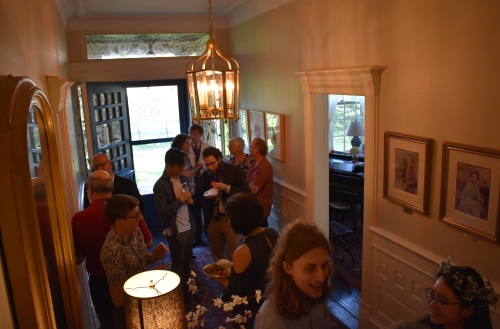 Of our first year PhD candidates, Molly Mata has received funding to attend the American School of Classical Studies at Athens summer seminar, “Finding the Spartans: History, Landscape, & Archaeology”; and Luke Madson will deliver a paper at the Coimbra Celtic Conference in Classics, as well as—thanks especially to significant funding from the Classical Association of New England—attend the Classical Summer School of the American Academy in Rome.

There is much, much more to be said—but we’ll leave it at that, with a heartfelt congratulations to all our 2019 graduates and award receipients! 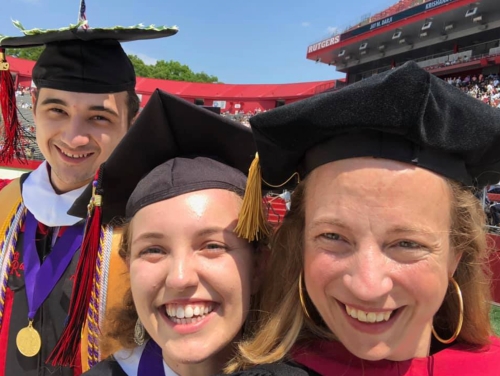