Looking back on the life and career of Walter Seward RC’17 (1896-2008)—as we did in our last weblog—it’s hard not to spare a thought also for his younger contemporary at Rutgers, the larger-than-life figure of Paul LeRoy Robeson RC’19 (1898-1976). 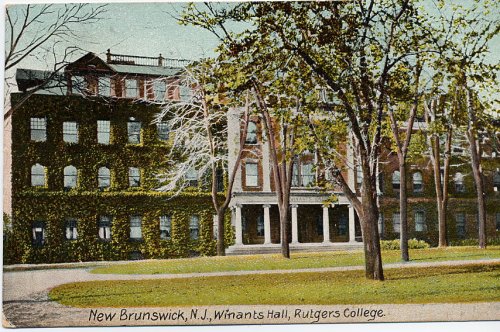 Robeson, a native of Princeton NJ, studied Latin for four years at Somerville (NJ) High School before matriculating at Rutgers. He was just the third African American ever to attend the College, and the only black student enrolled during his time on the Banks—which gave rise to some petty snubs and ugly confrontations.

(Princeton would not have been an option for the young Robeson: the first African-American student to receive an undergraduate degree from his home town university would be John Lee Howard, Class of 1947.)

Many of the details of Robeson’s achievements at Rutgers are exquisitely well-documented. Those include his junior year election to Phi Beta Kappa, and senior year induction to the Cap and Skull honor society. Also the breathtaking fact that at Rutgers he earned a total of fifteen varsity letters in baseball, basketball, track and field—and of course football, a sport in which he was twice named a first-team All-American.

[Listen here to the Peerless Quartet‘s 1915 version of “On the Banks of the Old Raritan“, recorded for Columbia the year Robeson matriculated at Rutgers.]

Yet Robeson’s biographers don’t quite properly represent the facts of his enrollment in the demanding Classical Curriculum at Rutgers. Even otherwise authoritative sources on African Americans in Classics routinely seem to have missed it. 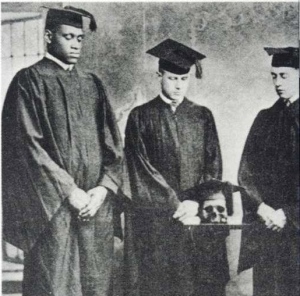 Let”s start with Robeson himself, in his 1958 autobiography, Here I Stand. He explains that his father, William Drew Robeson (who had studied classical languages as part of his Divinity degree at Lincoln University) had insisted on the importance for African Americans of studying “Latin, Greek, philosophy, history, literature”. Robeson explains, “So for me in high school there would be four years of Latin and then in college four more years of Latin and Greek”.

A glance at Paul Robeson’s undergraduate transcript yields a slightly different picture than his autobiography, written forty years after the fact. For Robeson, freshman year (1915-1916) it was introductory Greek in the fall plus Latin; in the spring intermediate Greek and Latin. Robeson in his sophomore (1916-1917) and junior (1917-1918) years continued with Greek, but not his Latin coursework. As a senior Robeson took no classical languages, but a year-long course in Roman law. A natural linguist, Robeson also studied German as a sophomore and Spanish as a senior.Robeson’s record shows a real dedication to the classical component of the Rutgers Classical Curriculum, with grades that earned him an Honors A.B. degree. (Roman Law was Robeson’s weakest classical subject with a grade of C, then improving to B in the second semester of study.)

Alas, in an undergraduate questionnaire Robeson declared “Mathematics” twice (freshman, sophomore years) as his favorite subject; as a junior “Psychology”. His senior thesis was in US constitutional law, on the 14th Amendment.

But the Classics field quite literally had the last word, in Robeson’s farewell to Rutgers. In the stirring peroration to his 1919 commencement oration, Robeson adapted a passage from Plutarch’s Banquet of the Seven Sages, invoking “Solon’s definition of the ideal government—where an injury to the meanest citizen is an insult to the whole constitution”.