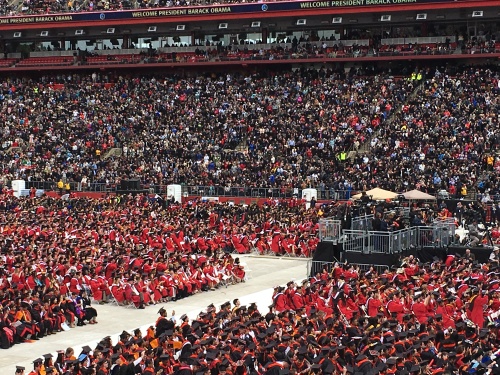 It was a B1G day on the Banks for RU Classics on 15 May 2016 as Rutgers celebrated a super-commencement to mark its 250th anniversary! The site? Rutgers’ High Point Solutions Stadium, where approximately 52,000 people, including more than 12,000 graduates seated on the field, took in the pageantry and proceedings.

President Barack Obama received an honorary degree and delivered a riveting 45-minute address, in which—among many other points—he referenced the pub where our Department got its start in 1771.

View of the President’s speech from the faculty section. Credit: Emily Allen-Hornblower

Congratulations to our Classics majors who received their degrees with the Class of 2016 at the School of Arts and Sciences Convocation that immediately followed the Commencement: Jessica Bailey, Matthew Klein, Oleksiy Lunhu, Daniel McCann, Margaret Morris, Michael Romero, Thi Trinh, Arya Vaseghi (who earned Departmental Honors), and Jennifer Yook.

And additional congratulations to our new PhD Katheryn Whitcomb, who joins the Classics faculty of Franklin & Marshall College next year as a visiting assistant professor. In the proceedings doctoral candidate David Wright also received a much-prized distinction, the degree of M. Phil.