It was a B1G day on the Banks for RU Classics on 15 May 2016 as Rutgers celebrated a super-commencement to mark its 250th anniversary! The site? Rutgers’ High Point Solutions Stadium, where approximately 52,000 people, including more than 12,000 graduates seated on the field, took in the pageantry and proceedings.

President Barack Obama received an honorary degree and delivered a riveting 45-minute address, in which—among many other points—he referenced the pub where our Department got its start in 1771. 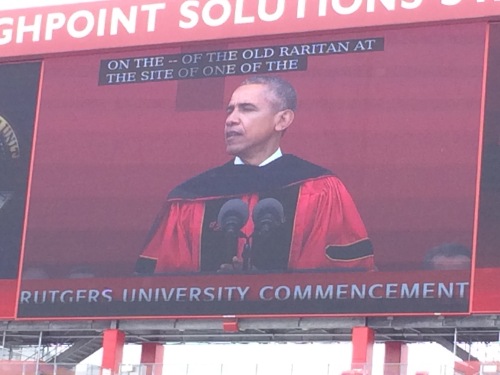 View of the President’s speech from the faculty section. Credit: Emily Allen-Hornblower

Congratulations to our Classics majors who received their degrees with the Class of 2016 at the School of Arts and Sciences Convocation that immediately followed the Commencement: Jessica Bailey, Matthew Klein, Oleksiy Lunhu, Daniel McCann, Margaret Morris, Michael Romero, Thi Trinh, Arya Vaseghi (who earned Departmental Honors), and Jennifer Yook.

And additional congratulations to our new PhD Katheryn Whitcomb, who joins the Classics faculty of Franklin & Marshall College next year as a visiting assistant professor. In the proceedings doctoral candidate David Wright also received a much-prized distinction, the degree of M. Phil.

For all-around excellence in Classics, Daniel McCann’16 earned the Jacob Brodhead Prize; integral to his winning the award were his superior translation of a difficult Lysias passage and an essay on Thucydides and politics.

As a member of Douglass Residential College, Tiara Youngblood’18 received the Cornelison Alumnae Prize for continued excellence in the study of Classics.

Further afield, Rutgers Classics major Akari Armatas’18 won the first prize in Latin in the 2016 New York Classical Club sight translation contest. There was an air of inevitability about the award, since last year Akari had won second prize in the same competition.

But that’s not all. This year the Department saw fully a dozen undergraduate students inducted into our Zeta Epsilon chapter of Eta Sigma Phi, the national honorary society for Classical Studies. As is traditional, fabulous laurel coronae graced the occasion for the initiates. 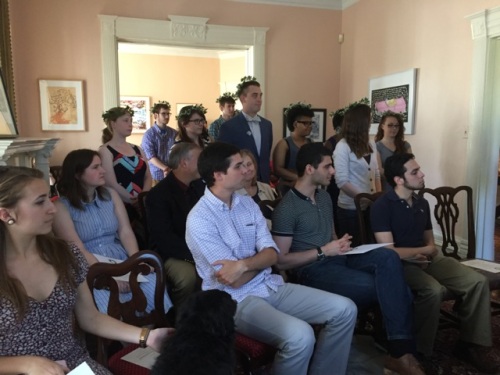 About that Presidential visit. Our student Matthew Tocco’16, who majored in History (Classics Option) and double minored in Greek and Latin, was on the scene at the Rutgers University Golf Course to make sure that the presidential helicopter, Marine One, had an impeccable landing and takeoff. (Full disclosure: Matt is also employed by Rutgers Golf Course.) 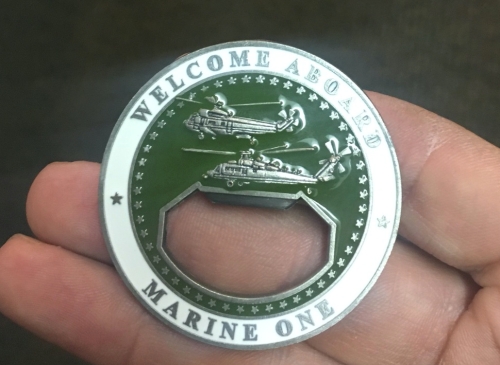 And as for the speech itself, here is what President Obama said, in (oblique) reference to the earliest days of Rutgers Classics: 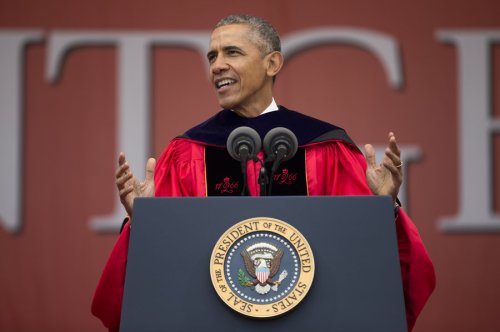 “Two hundred and fifty years ago, when America was still just an idea, a charter from the Royal Governor—Ben Franklin‘s son—established Queen’s College.  A few years later, a handful of students gathered in a converted tavern for the first class.  And from that first class in a pub, Rutgers has evolved into one of the finest research institutions in America…. America converges here.  And in so many ways, the history of Rutgers mirrors the evolution of America—the course by which we became bigger, stronger, and richer and more dynamic, and a more inclusive nation.”

That converted tavern was the “Sign of the Red Lion” in downtown New Brunswick. Its location was near the present-day corner of Albany and Neilson Street, the current site of Johnson & Johnson World Headquarters. Established in 1761, it was sold to the new Queen’s College a decade later. First classes started on Tuesday 12 November 1771. 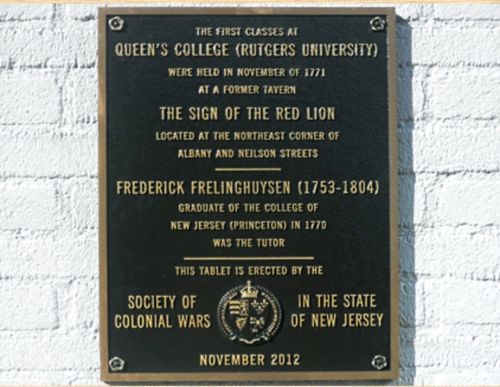 Embedded in the wall of the restaurant Due Mari (78 Albany Street, New Brunswick). The tavern was across the street

Members of the faculty? Well, there was just one of them. Frederick Frelinghuysen, a Princeton graduate (Class of 1770), who was just eighteen years old at the time. (Three years later he decamped from proto-Rutgers to study law, and ended up as an early US Senator.)

We’re not sure precisely what young Frelinghuysen taught his new students. Some of the trustees must have helped him out. But the Charter (revised 1770) of Queen’s College placed much emphasis on instruction in “the learned languages”, i.e., Greek and Latin, and that will have offered a blueprint.

And once Queen’s College got up and running, its plan of education (1787) tells us that candidates for admission had to “render into English, Caesar’s Commentaries of the Gallick War, some of Cicero’s Orations, the Eclogues of Virgil, . . . and at least one of the Gospels from the Greek.” 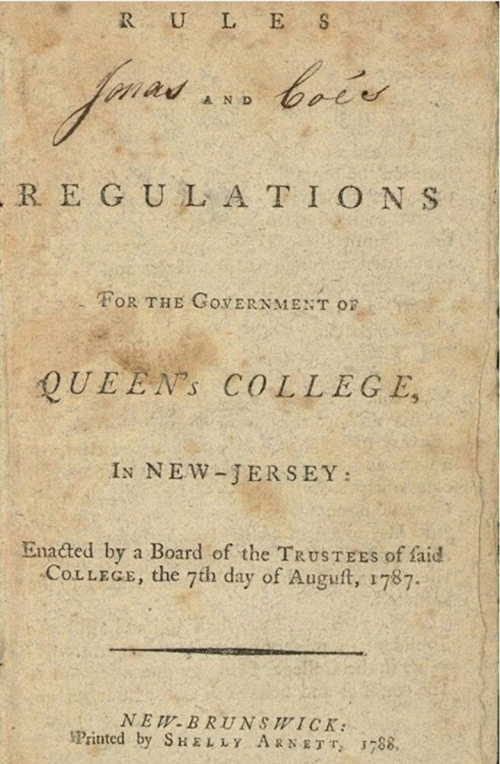 Take a gander at this description of the graduation exercises of Queen’s College on Tuesday 7 October 1788, as reported in New York’s Morning Post, and Daily Advertiser. Graduating senior Alpheus Freeman delivered a “Salutatory Oration in Latin, upon the evils of Avarice”. There followed a “Forensick Dispute” whether the Federal Constitution ought to be adopted, in preference to the Articles of the Confederation. [That sounds genuinely interesting—Ed.] The topic of the Valedictory Oration was “Upon Human Misery”.

In short, as the Morning Post reported, “the whole business was conducted with that propriety and decorum which is so characteristic of the President and Faculty of Queens College.”

But to return to reality—warmest congratulations to the Rutgers Classics Class of 2016!