Seems it’s time for another story about Rutgers (founded 1766) and a slightly older university (founded 1701) located in New Haven CT.

Thomas J. Biggs ’08 will be attending Yale University’s PhD program in Classics starting in the fall.

As a senior, Tom received funding from the Aresty Research Center for Undergraduates to complete his thesis, “Eunuchs and Castration Ritual in the Cult of the Great Mother.” Sarolta A. Takács, Professor of History and Dean of the Honors Program at the RU School of Arts of Sciences, directed the work.

The road to Yale might not have been long for Biggs, but it certainly was winding.

Tom started his undergraduate career at the Rutgers-Camden campus with a major in English. “I began studying Latin after taking a course on Renaissance epic”, Biggs explains, “and was encouraged to further develop my interests in classical literature by several professors who could tell where my interests were going. That year I went to Rome for the first time, and attended my first talk given by a classicist (which was a talk Corey Brennan gave in Camden on Roman games and chariot races). I then decided to transfer to New Brunswick so I could major in Classics as well.” 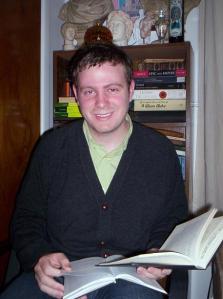 At Yale, Tom intends to focus on Latin poetry (mainly epic) and historiography, as well as Roman religion and cultural history. More general interests are the epic tradition from Homer to Milton and literary theory in relation to the study of classical texts.

While at Rutgers, Biggs worked in the Visual Resources Center in the Art History Department converting the slide library to digital images. “Since Yale’s Classics Department is currently working on a similar project I will probably get involved in that as well.”

Summer plans? “No Mediterranean travel, but I’m spending several hours a day reading Attic historians and orators as well as working on a study of Lucan’s Bellum Civile—almost as enjoyable as cruising the wine dark sea!”.