Just received—a very welcome electronic postcard from Bill Michael (RU Classics BA’01). He brings us up to date on his and his classicist wife’s amazing post-graduation Bucolics:

“My wife Dania Strevell (RU Classics ‘98) and I met in high school, but studied together in the Rutgers Classics department from 1995-2001.  I began as a sophomore pre-med student, and ‘converted’ to classical studies after she did.”

“By the time we were 28 we were already married with three children…I was teaching Classics courses in a private school in northern NJ and my wife was at home with the babies (yes, our first child did know the Greek alphabet before he was 2), but Cato, Virgil and a bunch of old monks were stirring in us a desire for ‘the rustic life’.”

“During my time at Rutgers, I studied the history of classical education and was convinced that there were (and are) many families who would be interested in classical studies if they were presented accessibly.  We wanted to bring them to the elementary school—and not as a silly side-dish. We gathered resources while at Rutgers and decided to begin restoring an older form of the classical liberal arts curriculum with our goal being to bring the classical humanities to the youngest students.  As much as we loved studying classical languages, history and philosophy, we felt we learned about them too late.  Further, with the increasing numbers of homeschooling families asking us for private instruction and information, we thought we might be on to something.”

A look across the pond on the Michael property

“While I enjoyed the privilege of reading Cato’s agricultural treatise and Virgil’s rustic poems in the country, I had to earn my bread.” 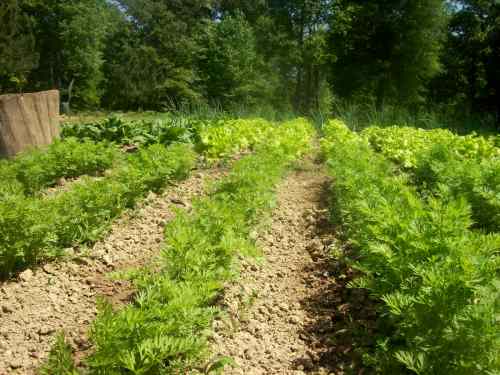 Carrots, spinach and onions in the Michael kitchen garden

“So, I spent the time teaching the Classics again at a private school in Charlotte, while we spent three years having more children and developing the curriculum and layout for the program on the side.”

“This past September, we launched the Classical Liberal Arts Academy online. Now, this is simultaneously a religious endeavor of ours, being old-school Catholics, but we achieved our goal and are making a living with Classics degrees—which many said was impossible.  Phooey.”

“At last, we are enjoying the self-sufficient  and self-employed life…with Classics degrees.  We are now the happy parents of seven, enjoying a quiet and peaceable life (yes, I brew my own)—up to our ears in classical studies. We will never forget our days in New Brunswick, studying with Professors Thomas Figueira, Shirley Werner, Jack Cargill, John Bodel and William Fortenbaugh.  Unfortunately, we can’t remember winning football games—you have that advantage over us.”

“As for your future with Classics degrees, we can assure that you that there are many exciting opportunities to make a living doing what you love—but you need to add some business savvy, courage and creativity to your passion. Interest in classical studies among prep students is skyrocketing as the modern Math & Science centered curricula leave so many unsatisfied.  Classicists have access to rare knowledge and skills that many  people can benefit from in modern society, but we need to take the effort of applying that knowledge in useful ways—in ways you probably don’t think much about while at the university.”

“Let our fulfilled hopes serve as encouragement for your own. God bless you all and a Happy New Year!  Feel free to contact us if you’d like to discuss any of these ideas.”

[Thanks Bill and Dania! And all the best—Ed.]

The Classical Liberal Arts Academy, as seen by Google Earth