When the New York Classical Club gathered this past weekend (Saturday 2 May) at Hunter College for its 2009 Spring Meeting, it was great to see two Rutgers undergraduates take away three of the prizes for the Club’s annual Undergraduate Greek and Latin Translation Examinations. 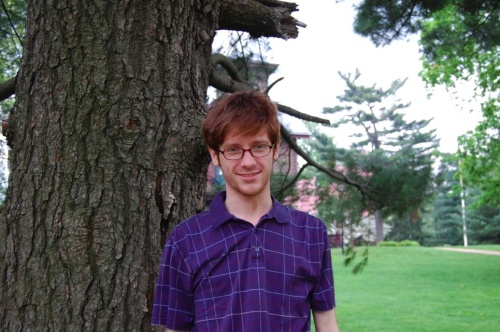 First prize ($250) in Greek and second prize ($150) in Latin went to David A. Nelson, a senior at Rutgers-New Brunswick majoring in Classics and minoring in Music. He lives in Ridgewood, New Jersey.

This is David’s second distinction within just a week’s time; at a ceremony on Sunday 26 April at the campus’ Nicholas Music Center he was one of a select group of School of Arts and Sciences students inducted into Phi Beta Kappa.

Allison Striano tied for third ($75) in the Latin competition. Allison is an SAS sophomore with a Biological Sciences major and Latin minor.  Her career aspiration is to become a dentist; around campus she is involved with the Pre-Dental Society and the SAS Transfer Center. Allison hails from Nutley NJ, and is a recent inductee into Eta Sigma Phi, the Classics honor society. As for the NY Classical Club competition, she says she “hopes to participate again in coming years”.

Each of the competitive examinations consists of one prose and one poetry passage appropriate for undergraduates.  Cicero and Virgil are typical authors for the Latin exam; tragedy and Attic prose are often given in the Greek exam.

That way to the Ruth Adams Building, home of RU Classics.