OK, we know that there have been no posts on the RU Classics Blog for like six or seven weeks…that’s because we’ve been researching for some big future features on Rutgers alums Lane Cooper (Class of 1896, and son of one of Rutgers’ more important classicists),  Ozzie Nelson ’27 and Mr. Magoo. Oh, and it’s summer.

So it was a genuine piece of great news to get this engaging postcard from our distinguished 2008 Ph.D. (and former University Trustee) Ryan Fowler.  Here Ryan offers a lyrical, richly illustrated portrait of his first full-time teaching position, at Iowa’s Grinnell College—with a few remarks on his next stop, which is another outstanding Midwestern small liberal arts institution, Knox College in Galesburg Illinois.

“One never knows what will catch the eye of a potential employer. I have a relatively odd set of teaching skills, but some of the skills desired by the Classics Department at Grinnell (such as the ability to teach Ancient Philosophy and Logic 101) had not even been mentioned in the American Philological Association placement listing. It is impossible to anticipate anything in the academic job process, but apparently there seemed to be a fit, and I was hired.

My first shock was the moving situation. I was living in Park Slope, Brooklyn commuting by subway or train to Brooklyn College (not bad) and The College of New Jersey in Ewing (very bad: look at a commuter’s map; its about 80 miles one way, through NYC and all of NJ). I asked about college housing: one house was left, a “rather expensive” four bedroom two story with hardwood floors, renting at $600/mo.

I was paying $1400 to share a small two-bedroom at the time. My commute would be “about a two minute walk.” A greater shock, perhaps, would be the population difference: from Brooklyn (many, many people) or New Brunswick (50,172) to an isolated town of 9,105 residents (around 1,589 of whom are students).

One of my first experiences at Grinnell was the Farmer’s Market, which is located on one of the two downtown streets. 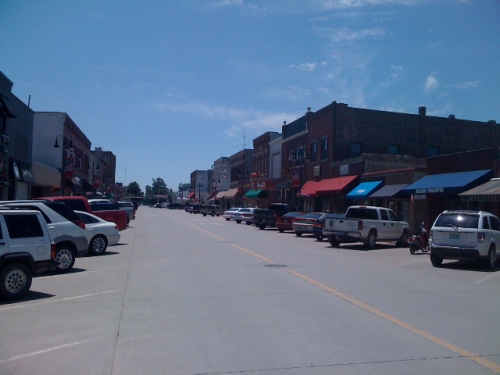 As the sun was setting, neighbors who knew everything about each other (good and bad) milled about, and the East-West train slowly crawled by a few feet away. Professors, recently arrived students, and other residents from the town collected around the local fare. This was as pure a Midwestern small town moment as I could imagine, and I savored it.

The campus is, as it should be in the center of Iowa, idyllic (the North/South train runs through campus. 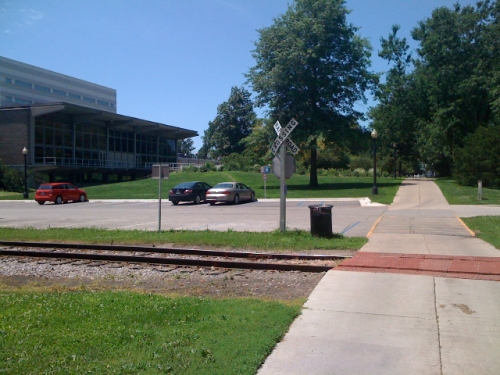 Modern buildings (such as the new Noyce ‘49 building…

…yes, that Robert Noyce) were surrounded by grass greener than I had imagined. 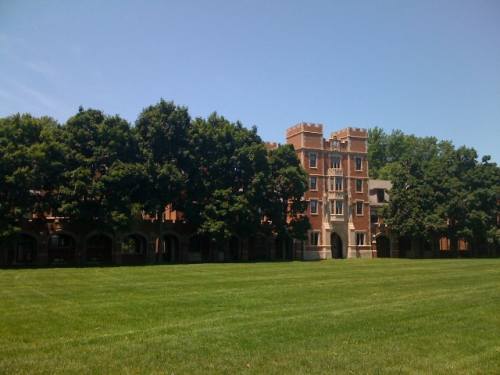 I enjoyed these scenes as long as I could until winter came, which would bring many feet of snow, impressive winds, and a day that would register on the local bank thermometer as -20 °F. 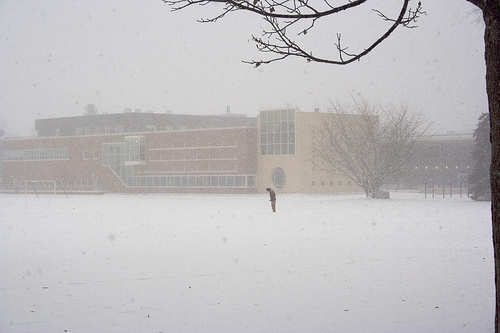 But I had been at Rutgers and Brooklyn College: I knew something about snow and cold. In fact, I knew nothing of what winter was capable of–ever heard of “Thunder Snow”? Neither had I.

There were some odd comforts to the area. About 30 minutes away, in a town of 300 was the Ladora Bank Bistro, a giant marble bank dedicated in 1920 (defunct by 1931) that served Riesling and Cabernet to farmers, business people from Iowa City, professors from various Iowa institutions, and students out on dates. If you haven’t seen a giant of a farmer (covered from head to toe in oil or green hay, except for a perfectly clean outline of his safety goggles) order “a dry Chenin Blanc and a mushroom torte,” then you have not yet experienced the New Midwest.

Teaching would prove to be rather different than previous gigs. My average class size would be going from a (reported) 14:1 at Rutgers to 10:1 at Grinnell, and I did have small classes, ranging from 6 in Advanced Greek to 20 students in Logic 101. But gone were the days of anything resembling a lecture; I found very quickly that I was encouraged not to do it, and further that the students would not tolerate it. The discussion-based method here, when done well, feels like teaching without a net. Begin a class with a notion, some statement: if it is a good one, excellent discussion will flow with some minor directing; if it doesn’t spark anything, there could be utter silence and stillness.

A new experience for me would be the application of an (informal) honor code (cf. Oberlin College for an infamous formal version). I found that students were, on occasion, giving incorrect responses for problems that were answered in the back of the textbook (Robert Paul Churchill’s Logic). After asking someone in office hours, I was told that looking in the back of a book was a form of cheating. The same was said for Wikipedia and a number of other undergraduate stand-bys.

Overall, I found Grinnell students personable and engaged. In Hum 101 (a “greatest Greek hits” course) we began watching adaptations of tragedies on Thursday evenings. They didn’t like Thursdays (it is both a study night and a party night: often at the same time), so they voted unanimously for 10am Saturday morning viewings. Enjoying a pot of coffee I would make in the department and local fresh donuts, we watched a dozen films over the rest of the semester.

Our final Saturday together we pulled out the big guns: when Von Trier’s 1988 Medea ended I had the most interesting experience—14 of us all sat in silence in a darkened theater with the sun shining through the cracks between the shades, there in a little town in the middle of Iowa, collectively moved by the image of two small innocent bodies swaying from the bare tree.

I will move relatively soon from this visiting position to the next: a last-minute spot at Knox College. I know relatively little about my new employer, except that it is generally considered to be a sibling school and is in the same consortium and conference as Grinnell. With fewer students (1,340 or so) and an excellent reputation, the character of the students remains to be seen. I do know that Knox does have a somewhat elaborate official honor code. And this time the house I am renting is a pleasant $500 a month.”

Thanks so much Ryan, from everyone at RU Classics!  We hope that you get to teach at least one course in the Knox College Old Jail!