Ask anyone in these parts about the significance of the year 1869, and the answer is likely to be “Rutgers—fielding a team of mostly classicists—defeats Princeton in the first intercollegiate football game!” Anything else for that year? “Rutgers students found the campus newspaper The Daily Targum.” Keep going? “The Golden Spike.” After many iterations of the question, “Oh yeah, of course, the creation of the APA—the American Philological Association.”

Here’s the story in brief, from the Associations’s website. Founded in 1869 by “professors, friends, and patrons of linguistic science,” the APA is the principal learned society in North America for the study of ancient Greek and Roman languages, literatures, and civilizations. While the majority of its members are university and college Classics teachers, members also include scholars in other disciplines, primary and secondary school teachers, and interested lay people.

Now, after 143 years, there’s a proposal from the APA’s Board of Directors to rename this professional group.  As APA President Jeff Henderson (Boston University) described it yesterday (8 October 2012) on the APA blog, it is  “the Board’s unanimous view that we should change the name of our association.”

Normally the role of the Rutgers Classics blog is to highlight developments in ancient studies on the Banks of the Raritan, and update folks on our wider RU Classics community. But the fate of this proposal obviously will have an impact on the whole identity of this field. 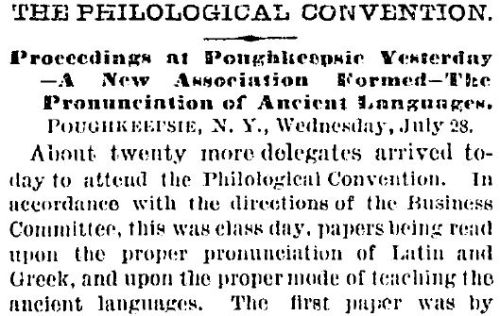 The Board, Henderson elaborated, had been considering a name change for a decade.  “The grounds for special caution are obvious.  We have long been a learned society true to the purpose of its founders, ‘professors, friends, and patrons of linguistic science’—not improperly called philology. As we approach our 150th anniversary in 2019 we take just pride in our success, adaptability, and continuing vitality as the American Philological Association.”

“In recent times, however”, wrote Henderson, “the scope of classical studies has broadened, and we have become a professional organization as well as a learned society, so that the practice of philology no longer defines all that our association is about”, which Henderson  underlines is “to play ever broader roles as an academic, professional, and public resource.”

“In addition,” Jeff Henderson continues, “the term philology has become so obscure to all but practitioners as to impede our efforts to gain broader public (even academic) visibility, and we are not readily found when people search online (for instance in Google) for information about classics and the classical world.”

To judge from the usual social media outlets, this instantly has turned into a very hot topic among ancient studies folks. Well, here at RU we welcome your public thoughts on the Rutgers Classics blog comment board .

The first suggestion received here however was borderline inappropriate: AULA, the American Undead Languages Association. A bit of investigation shows that this was inspired by a dubious item in the Weekly World News archives. [AULA is a nice classical acronym though.—Ed.]