It all happens Friday and Saturday 13-14 September 2013, at the Rutgers University Inn & Conference Center. Project Theophrastus, as part of its continuing study of the School of Aristotle, is holding a conference on a Greek epitome/survey of Peripatetic ethics. The survey is attriubuted to Arius Didymus, who is believed to have been the court philosopher of Caesar Augustus. See below for a full schedule of the event.

Arius Didymus was known for having advised Octavian (the future Augustus)  to spare the inhabitants of Alexandria when that city fell to his Roman army. Arius also was admired in antiquity for his Consolatio addressed to Livia, Augustus’ wife, on the death of her son Drusus.

Arius C, his survey of Peripatetic ethics, contains much that can be traced back to Aristotle and Theophrastus, but it is also valuable as a window into developments within the Hellenistic Peripatos, including interaction with the Stoic and Epicurean Schools.

As it happens, Arius’ On Stoic and Peripatetic Ethics is closely connected with Rutgers. The work was the subject of a conference in New Brunswick on 26-28 March 1981, whose proceedings appeared in 1983 as the very first installment in the Rutgers University Studies in Classical Humanities (RUSCH) series, which goes to underline its importance.

This September 2013 conference, organized as in 1981 by Rutgers Professor Emeritus William Fortenbaugh, is free and open to the public. It marks the 18th continuous biennial conference hosted by Project Theophrastus, in locations across Europe (England, France, Germany, Greece, Hungary, Italy, Netherlands) and the United States (Colorado, Indiana, New Jersey, Texas). All have seen or are seeing publication with Transaction Publishers.

David Hahm (Ohio State): The Sitz im Leben and the dialectical context of the doxography

Jan Szaif (UC Davis): The evidence in Doxography C for different Peripatetic views on how to formulate an Aristotelian conception of eudaimonia

Stephen White (Texas): Peripatetic choice and why it matters

Peter Simpson (CUNY): Defense of v. Arnim and comments on Arius on politics 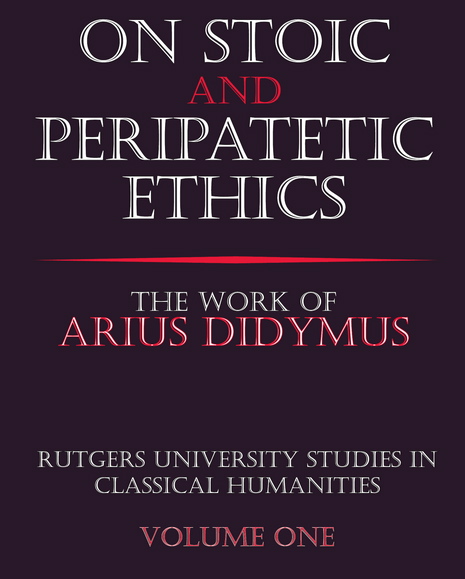 RUSCH vol. 1 (1983), published like all subsequent volumes in the 30-year old series by Transaction—and all available in ebook format