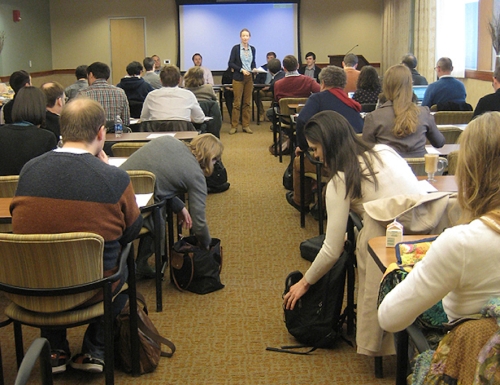 On the brisk and sunny morning of Friday 6 March 2015, following yet another major snowstorm, groups of graduate students in Classics from Columbia University, New York University, the University of Pennsylvania, and Princeton University braved delays and mild chaos at New York, Philadelphia, and Princeton’s train and bus stations in order to make their way to New Brunswick and meet up with their peers from Rutgers’ Classics department at Brower Commons on College Avenue.

The goal? To spend the day examining Rhesus, a highly unusual and intriguing play traditionally attributed to Euripides but now thought to have been composed in the late 4th century BCE.

This annual gathering was part of an ongoing tradition known as GreekFest; its counterpart, the Corridor LatinFest, was hosted by NYU in the fall. These annual gatherings bring together graduate students from all five universities—along with some of their faculty—to look at a (collectively chosen) minor ancient (Greek or Latin) text.

At this year’s Rutgers event, students shared their preliminary findings in a series of panels throughout the day, exchanging comments and questions in an informal and congenial setting. The “Fest” ended with a general discussion in true symposium format, complete with the requisite libations, as well as specially ordered bacon-wrapped scallops and mushroom-filled phyllo pockets.

All present learned much and left enriched, wanting to ponder the strange play some more. (Rumor has it some students did, in fact, do just that, at a nearby pub).

May the dialogues prompted by Euripides (and his imitators) and the fruitful exchanges it gave rise to continue! The Barnard Columbia Ancient Drama Group’s spring production of Euripides’ Ion is but two months away (2-4 April 2015). To be continued…including at GreekFest 2016, hosted by Columbia. 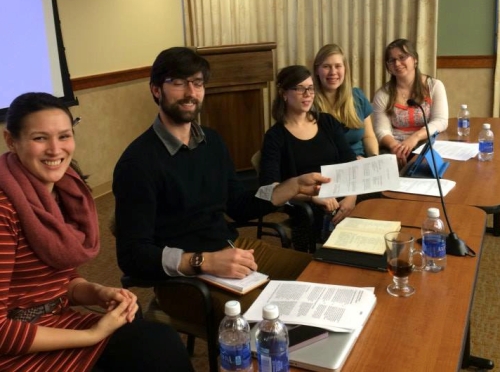