Since 2013, students at Rutgers-New Brunswick have enjoyed an extraordinary opportunity to “do history” by working with digitized pages of primary documents (dating from 1400-1940) belonging to the Papal family of the Boncompagni Ludovisi.

So it is with great sadness that Rutgers Classics reports the death of the head of family, HSH Prince Nicolò Francesco Boncompagni Ludovisi, aged 77, on 8 March 2018, at his ancestral home of the Casino Aurora in Rome. Trained as a chemical engineer at ETH Zurich and fluent in seven languages, Prince Nicolò possessed a dazzling knowledge of European history and enthusiastically encouraged Rutgers’ efforts to delve into a topic in which he had unparalleled expertise and passion—the architecture, art and archives of the Boncompagni Ludovisi.

The Prince was the 11th great grandson of Pope Gregory XIII Boncompagni (1572-1585), who introduced the Gregorian Calendar, and 10th great grandnephew of Pope Gregory XV Ludovisi (1621-1623), who founded the modern system of Papal elections. The funeral of Prince Nicolò was held according to traditional noble custom in Rome on 10 March at the church of St. Ignazio, built starting in 1626 by his 9th great granduncle Cardinal Ludovico Ludovisi. For a remembrance of the life and career of the Prince, and notice of his 17 April 2018 memorial service in Rome, see here.

The Boncompagni Ludovisi count numerous figures prominent in the Catholic church, European and Italian politics, science and the arts. For two and a half centuries, the family also maintained one of the largest and most important collections of ancient sculpture ever assembled. 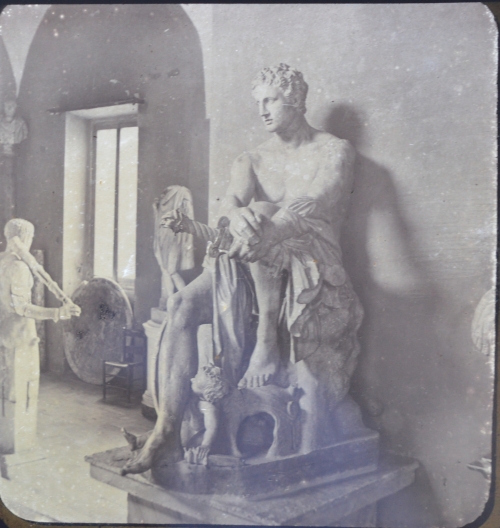 In 1947, Prince Francesco Boncompagni Ludovisi (1886-1955) donated the bulk of his family’s manuscripts and papers, relating to a full millennium of its history, to the Vatican Secret Archive. But he retained many high-value documents, totaling well over 100,000 pages, and on his death left them to his grandson, Prince Nicolò. These were stored in the Casino Aurora, the last vestige of the famed Villa Ludovisi, where the family has lived since 1622. Prince Nicolò in turn has left the private archive to his wife, HSH Princess Rita Boncompagni Ludovisi.

The rear facade of the Casino Aurora in Rome.

It was Prince Nicolò and Princess Rita Boncompagni Ludovisi who, following upon a series of exciting new discoveries in 2010, opened their archival treasures to Rutgers Classics associate professor T. Corey Brennan for study. For the better part of this decade, Brennan has been collaborating with the Prince and Princess to digitize and catalogue their vast trove of unpublished archival material, with the aim of creating an online Rutgers resource for undergraduate and advanced research. 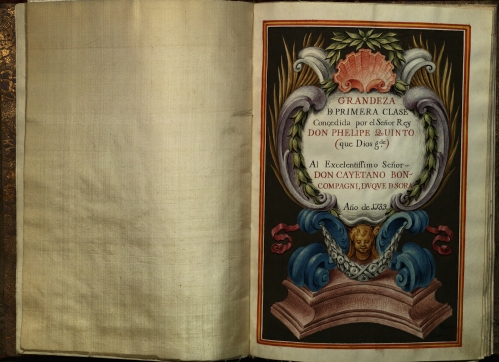 That is not all. The Prince and Princess Boncompagni Ludovisi worked with Brennan to create a Rutgers online course entitled “Papal Rome and its People”, centered in Rome at their Casino Aurora, which was offered to students in 2014, 2016, and 2017. They also enabled Rutgers’ School of Arts and Sciences to produce a student-directed feature film “The Princess of Piombino”, filmed at their Casino Aurora in 2013 and 2014; the film had its premiere screening at Harvard University’s Fogg Museum in September 2016. In each of these projects Rutgers has received expert help from Rome-based author Anthony Majanlahti.

Thanks to a generous grant of Rutgers University Strategic Funds, digitizing hardware made its way from the New Brunswick campus to Italy in November 2015. Since early 2016 Tatiana Caltabellotta of the Amministrazione Boncompagni Ludovisi has succeeded in digitizing approximately 85 percent of this unseen and unstudied private archive. In New Brunswick, the process of adding simple metadata to the scanned files is well begun.

Tatiana Caltabellotta of the Amministrazione Boncompagni Ludovisi, who has scanned the family’s private archive for Rutgers.

Results have been immediate, as student contributions to the project website villaludovisi.org show. For instance, one find, published by Michael Antosiewicz ‘18, has been an autograph declaration from 1552 of the future Pope Gregory XIII, attesting to the paternity of a son, Giacomo Boncompagni—who during his father’s pontificate became one of the most powerful men in Europe.

Another find was a set of photographs from 1904 that led to the rediscovery in June 2016 of an entire 19th century fresco cycle in the Casino Aurora, long hidden under a false ceiling. The first glimpses of this ceiling received blanket coverage in the Japanese national and regional press. In July 2017 a second hidden ceiling emerged, in this case dating back to 1570, the earliest stratum of the Casino’s construction. A series of four small Mannerist paintings was revealed on the upper walls, evidently the original decoration of an important room in the Casino known as the ‘Sala del Letto’. 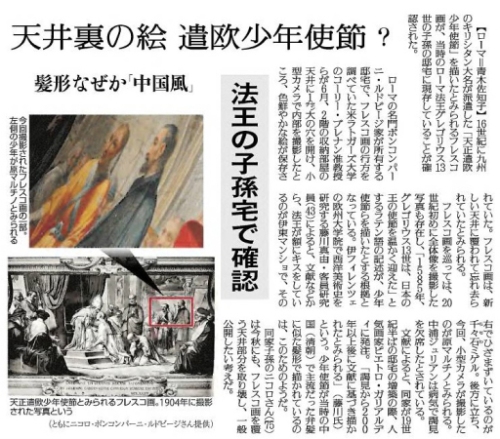 The Yomiuri Shimbun, the largest-circulation newspaper in the world, on 13 August 2016 covers new Rutgers-funded discoveries at the Casino Aurora

Now that scanning of the Casino Aurora archive is nearing completion, the main goal for academic year 2018/2019 is to complete basic metadata for the digitized documents, and create a web-based platform for the Boncompagni Ludovisi material to enable easier student consultation.

The rich material in the ‘Archivio Digitale Boncompagni Ludovisi’ has already inspired more than a dozen year-long student projects at Rutgers, most under the umbrella of the Aresty Undergraduate Research program. In the last five years (2014, 2017), two students working on Boncompagni Ludovisi material— Nicoletta Romano ’16 and Max DuBoff ’19—have won the distinction of “Best Poster Presentation in the Humanities” at the annual Aresty Undergraduate Research Fair. 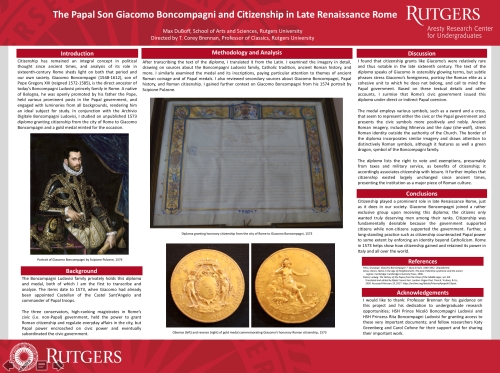 Poster presentation by Classics and Philosophy double major Max DuBoff ’19, which placed first in the Humanities at the 2017 Aresty Undergraduate Research Fair.

It is fair to say that, at present, the history of no other Roman noble family is receiving such sustained academic attention. An ultimate aim of this project is not just to enhance the Humanities environment at Rutgers, but also to provide a model for other Italian noble families to open their private holdings to digitization.

HSH Prince Nicolò and HSH Princess Rita Boncompagni Ludovisi, photographed on one of the roof terraces of the Casino Aurora. Archival work suggests that Galileo used this space for astronomical observations in the 1620s, leaving two of his telescopes to Cardinal Ludovico Ludovisi before the latter’s death in 1632.