The Rutgers Classics lantern slide collection consists of almost 1000 original exposures taken in the 1930s as part of archaeological research done in Italy, Greece, and Turkey, by faculty members of the New Jersey College for Women—now known as Douglass College.

Above (all from 1935): NJC group examines the one remaining column of the Temple of Hera at Samos; an archaeological worker spins at Delphi; noontime musicians at Delphi; veiled woman at Rhodes.

The collection—now completely digitized—provides a glimpse into the NJC academic and teaching culture of the 1930s, as well as American women in archaeology in the pre-World War II era. 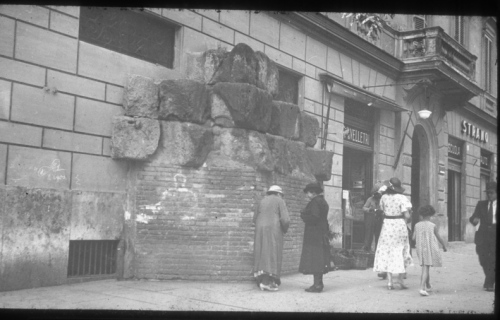 Above, from 1935: Lion Gate at Mycenae; remains of the Servian Wall in Rome.

For instance, one of the main figures in the making of these images is Evalyn A. Clark, then an assistant professor at NJC.

Above (from 1926, second from right), Evalyn Clark as a Johns Hopkins graduate student in Classics. TRS Broughton is second from left.

As a direct result of these travels, it seems, Clark retooled herself at Harvard and Columbia as a historian of modern nationalism. Soon afterward, in 1939, Clark—having left New Jersey to join the Vassar faculty—went on to co-found the Berkshire Conference of Women Historians.

For the dramatic story of how these images came into being, and then reemerged after a half-century or more of neglect, see this article in the 20 February 2006 issue of Rutgers Focus. 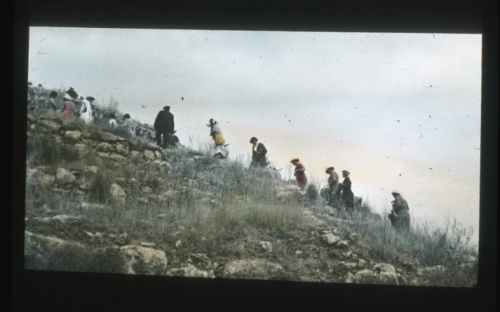 Above: New Jersey College for Women faculty on the ascent, 1935.

One response to “Rediscovered at RU: lantern slides shed new light on women in archaeology”