The Metropolitan Museum of Art in New York fully reopened its Greek and Roman galleries in April 2007, to much acclaim. What better resource, then, to put undergraduates enrolled in “Life & Culture in the Early Roman Empire” at Rutgers-Newark thoroughly into the antiquity zone?

With the help of a generous Resource Grant from the Classical Association of the Atlantic States, Rutgers graduate student Liz Gloyn did precisely that. Aided by the expertise of fellow Rutgers Classics PhD candidate Benjamin Hicks, Gloyn—a participant in the inaugural year of the innovative Rutgers-Newark Scholar/Teacher program—took her students on a whirlwind tour of the Roman galleries, pointing out highlights of the collection such as a Roman copy of the famous Aphrodite of Cnidos and two cubicula with reconstructed wall paintings.

Students were also able to see the kind of statues that would have been kept in a lararium, and the group stopped by the famous Etruscan chariot—leading to some questions about how people were supposed to ride in it.

The Rutgers-Newark students had good things to say about being guided around the museum. “I’ve been to the Met Museum of Art before. However, it is very different when you have someone tell you what the things you are seeing are about,” said Ghazal Behreini ’11.

The trip also helped students make a connection between the objects they were seeing and what they had read or heard about. “I was able to link the information discussed in the class to the actual tangible objects from the ancient times,” said Denis Pozdnyakov ‘12. And Betty An ’12 added, “the trip helped developed my understanding of the course materials even better because instead of just reading off from literary books and texts, I got to see the works in person.”

All the students seemed amazed at the level of skill shown in the objects on display. “This all helped to appreciate the workmanship of the Romans, and their attention to detail, even in the most mundane objects, like mirror handles”, pointed out Jen Silva ’10.

Gloyn feels the trip was a resounding success. “It’s so important to give students an understanding of material culture as well as literature, and to give them something concrete to help them remember what they’ve learnt over the course,” she said.

We’re sure that the Rutgers-Newark students will remember their experience of Roman culture long after the semester ends. [And the dynamic duo of Gloyn and Hicks too—Ed.] 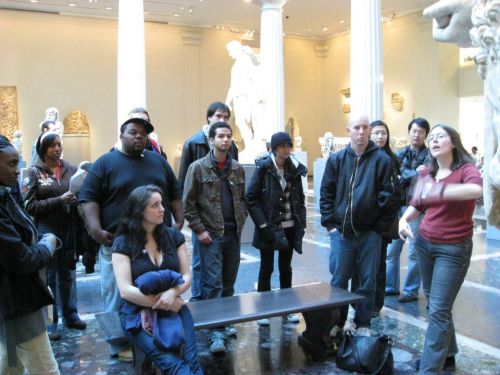