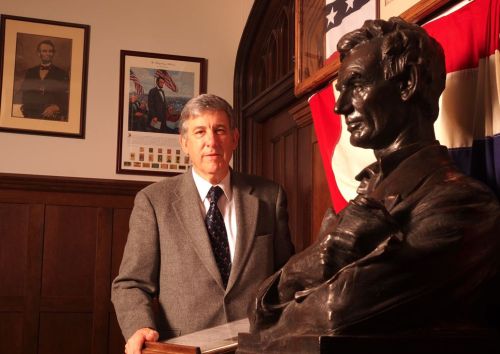 Dr Henry V. Bender, with some of the Lincolniana he rescued from oblivion, in the John M. Levis 2d Memorial Room of the Ryan Library, The Hill School

It still seems incredible, to anyone who knows—or has even heard of—Henry V. Bender (Rutgers Classics PhD 1987). In June 2012 Henry Bender retired from full-time teaching at The Hill School in Pottstown, Pennsylvania, after a career of  teaching, scholarship and service that defies hyperbole. This milestone, and the fact that 2012 marks the 25th anniversary of Henry’s doctorate at Rutgers, make it practically obligatory for us here at Rutgers to reflect on Henry Bender’s more than four decades in the Classics field.

What follows below is an attempt to capture at least some facets of Henry Bender’s long and storied career, with contributions by colleagues such as Judith Hallett (Professor of Classics, University of Maryland-College Park), Patrick G. Lake (Instructor of Classics, Hill School), and Brunilde Sismondo Ridgway (Rhys Carpenter Professor of Classical and Near Eastern Archaeology emerita, Bryn Mawr College). In the digital medium there is no limit on space, so your contributions are welcome here too.

Henry Bender retired from The Hill School as Elizabeth Blossom Chair of Humanities (since 1998) and Chair of Classical Languages (since 2003). Henry’s significant achievements at Hill went far beyond his formal roles as Instructor of Latin and Greek and (appropriately) Coach for strength and conditioning. 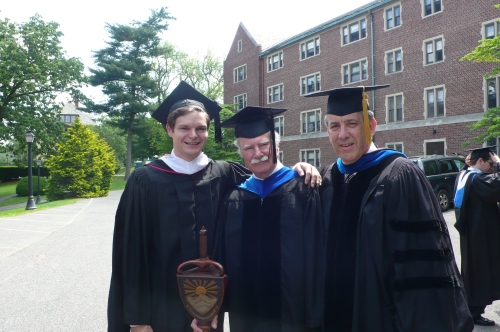 Take for instance a chance find Henry Bender made in spring 1999, when he took up a new office in what had been the Hill School’s History department. While cleaning up the room’s bookshelves, Henry found tucked away four authentic photographs of Abraham Lincoln—dramatically adding to the small number (about 160) of “accepted” photos of the President.

Famed Civil War photographer Matthew Brady had taken two of these images (they were made directly from his glass-plate negatives). Another one, by Brady’s protegée Alexander Gardner, portrayed Lincoln just four days before he was assassinated. The provenance was impeccable. Henry himself discovered that Frederick Hill Meserve, a noted collector of Lincoln memorabilia, had donated the photos to The Hill School in 1951. But it took almost half a century, and the  intervention of Henry Bender, for the gift to have its intended effect.

“I worked with Henry for nine years at The Hill School”, recounts Dr. Patrick Lake, a Classics Instructor at Hill. “He is one of the first people in my career that I could right refer to as a mentor.  He is a legend here at Hill, and he encapsulates for me much of what it means to be a teacher and a scholar.  Our tendency in Classics can be ‘to embalm facts,’  but that is not the case for Henry.  Quite the opposite.  He makes the mute stones speak—ask anyone who’s ever travelled with him—and puts the humane aspects of our discipline first, changing the lives of his students in the process.”

A montage of images, and student testimonials, from the Henry Bender-led Hill School Humanities Trip (2010), to Greece and Italy—one of almost five dozen such excursions he has organized  over the years

And on top of all the teaching at Hill and St. Joe’s came near-continuous visiting appointments for Henry Bender at Villanova University, St. Joseph’s University, plus summer teaching at Rutgers and (in 2008-2009) an appointment at The College of the Holy Cross as a visiting associate professor.

In that time Henry received a staggering number of teaching awards. They have come from The Hill School (2007) and St. Joseph’s Prep (1988, with additional honors in 1998, 1997, and 1977), as one might imagine. But adding to the accolades have been the University of Chicago (2005, 1996); University of Richmond (2000); the Advanced Placement division of Educational Testing Services (1994); and the Commonwealth of Pennsylvania (1994). Perhaps most impressively, in 2005 the Classical Association of the Atlantic States honored Henry with its Ovatio Award for Teaching. 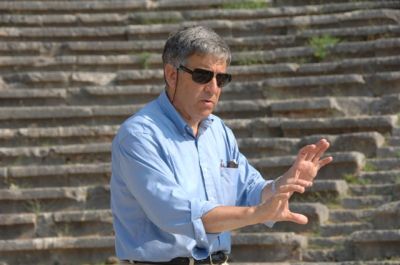 His scholarship? Henry Bender received a Fulbright  in 1984 for study in the Classical Summer School of the American Academy in Rome (AAR). He returned to the AAR in summer 1988 as a participant in one of the most remarkable NEH seminars that the institution has ever hosted, “The Symbolic, Religious and Social Significance of Roman Dress”, under the direction of Larissa Bonfante and Judith Sebesta (complete with two ancient fashion shows on the steps of the Academy). Remarkably, Henry then went on to participate in three  subsequent summer NEH seminars (at Harvard, Episcopal Academy, Tufts)—and capped it all with an appointment as a NEH Lecturer for 2006-2008.

Henry Bender has authored a long series of articles and about a dozen books in the field of Classics and its pedagogy: on Latin grammar, both Greek and Roman archaeology, ancient mythology, and especially Catullus (including an academic best-seller), Horace and Vergil. He is also an indisputable pioneer in the use of podcasting for the teaching of Latin literature, grasping the possibilities of the technology as early as 2007, while teaching AP Latin at Hill.  Since then Henry Bender’s Latin podcasts have seen many tens of thousands of downloads (21,000+ in the first year alone).

But let us go back—way back—to the early 1970s. Bryn Mawr’s Brunilde S. Ridgway recalls, “In July-August of 1971 I directed one session of the Summer School sponsored by the American School of Classical Studies at Athens. As a special concession, I had been allowed to have with me my oldest son, Conrad, who was almost 12. The student group comprised  20 people ranging from three advanced undergraduates to a Full Professor of Classics, several graduate students, several High School teachers, and even a Catholic nun. Needless to say, I was quite worried about taking proper care of all participants, especially during the strenuous travels and the visits to many sites often in impervious locations, during the hottest Greek months:  the regular students‘ needs had to have priority over my own son’s.”

“Fortunately,” Bruni Ridgway continues, “within the group was a Bryn Mawr M.A. recipient who was then teaching Classics at St. Joe’s Prep: Harry Bender! (We have always called him Harry.) Whether because of his experiences with his seven siblings or because of his familiarity with high school pupils, Harry immediately ‘took over’ Conrad  and relieved me of most of my concerns. It was the beginning of a warm and long friendship that has only strengthened through the years.” 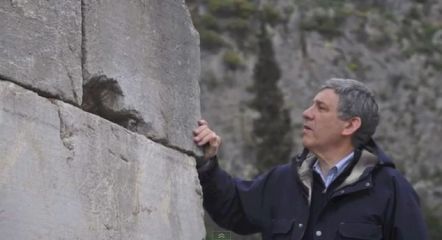 Henry Bender was educated at St. Joseph’s Prep in Philadelphia, earned his BA from Fordham University in 1967, and after graduate work at Penn State (MA 1968) and Bryn Mawr, received his PhD from Rutgers. But let us hear more from Professor Ridgway:

“I could write at great length about my admiration for Harry: his love for classical cultures, his enthusiasm for teaching, his incredible organizational skills, his loyalty and selflessness. Several times he brought his classes to the Ella Riegel Museum at Bryn Mawr College, so that I could expose them  to archaeological exhibits and concepts.  Once, when the Archaeological Institute of America held its Annual Meeting at Philadelphia, Harry volunteered his pupils to provide whatever help was needed (those were the days of slide projectors!), with properly organized schedules, all shifts worked out, all details specified. Never had the AIA meetings’ corps of volunteers performed so smoothly and  efficiently before! ”

“In 1986-87”, continues Bruni Ridgway, “I was asked to co-direct Harry’s PhD dissertation for Rutgers University, since it involved a topic of Hellenistic-Roman sculpture: the Sperlonga groups. Predictably, with characteristic Harry’s efficiency, he worked most speedily at his dissertation despite his continuing teaching, and finished in record time with extensive research, sound scholarship, and originality.”

In sum, concludes Ridgway, “I cannot think of another person possessed with the vitality and energy I have witnessed in Harry through these many years, and I know that ‘retirement’ for him is an empty word, or simply the term marking the beginning of another phase of activity equally important and rewarding. Ad majora.”

What will not come as a surprise is that Henry Bender shows absolutely no sign of slowing down. The next stop after Hill? Saint Joseph’s University, where he continues to teach Latin and Classics in the SJU Classics and Ancient Studies Programs, as well as in its Honors Program—continuing an association with that Philadelphia university that he has held since 1984.

But we’re not finished yet. Professor Judith Hallett contributes a song in honor of Henry Bender, to the tune of “That’s Amore”…

Who ranks second to nullus, in selling Catullus?

Who’s the true raging taurus on lyrics by Horace?

In the Forum? Apud forum?

Who can guide student tours to Greece, keepin ‘em all calm, keeping peace

And not bore ‘em? Such decorum!

Who’s endowed as can be with vim and energy?

As we say classic-ly, you’re the best that can be, dear Henricus. 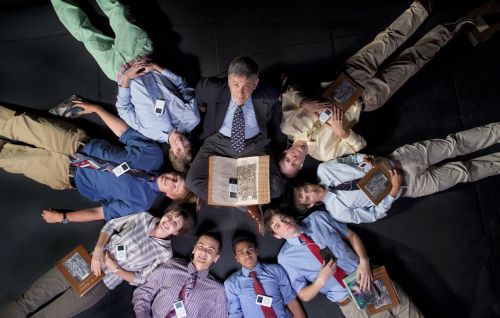 Henry Bender with podcast-ready Vergil students at Hill. From the cover of Hill Ties, alumni/ae publication of The Hill School, Fall/Winter 2007/8

The Rutgers Classics Weblog owes special thanks to Cathy Skitko (Director of Communications) and Jennifer Bechtel (Associate Director for Communications/Website Editor), The Hill School, for their generous help.