From The Warriors (Paramount 1979). It’s based on Xenophon’s Anabasis—really!

Picture this. You’ve been laboring over introductory ancient Greek for a full six months, and you’re starting to empathize with those ancient rowers chained to the bottom bench of an Athenian trireme. There’s still snow on the ground and the sun is setting at  5.50 PM. Baseball opening day is almost a month away. You shuffle into your early morning class on the 4th of March, and at the start of the hour your Greek teacher yells….”HAPPY EXELAUNO DAY!”. If you’re lucky, the instructor has brought cupcakes along. Or better yet, she or he absolves the students from some usual ordeal, such as writing the principal parts of highly irregular verbs on the blackboard to general ridicule.

You see, ‘exelauno‘ is a pun. One of the meanings of the Greek verb exelaunein (that’s the infinitive form) is “to march forth”. It’s particularly common in Xenophon’s Anabasis, a masterpiece of early fourth century BC prose that’s one of the more gripping first-person military narratives that has come down to us from any age. And since “march forth” sounds just like “March 4th”…well, it’s not hard to see the point of the joke. These days, lots of classics folks at all levels of study in North America acknowledge the “holiday”, to varying degrees. But who first came up with this  incredibly clever and witty addition to the classicists’ calendar?

Over the decades many introductory Greek students have  enthusiastically credited their own teachers for first designating 4 March as “Exelauno Day”. But the identity of the originator is not in dispute. It is one Clarence Willard “Pop” Gleason (1866-1942), a legendary teacher of classical languages at the famed Roxbury Latin School, in what is today a neighborhood of Boston. Founded in 1645, Roxbury Latin is the oldest school in continuous operation in North America, and boasts a startling number of truly notable alumni. (One uses the designation ‘alumni’ advisedly, since it has remained throughout its history an institution for boys, today about 300 in grades 7-12.)

Clarence W. Gleason was an impressive scholar who is one of a very select group of secondary school teachers to earn an entry in the (essential) 1994 Biographical Dictionary of North American Classicists edited by Ward W. Briggs and his electronic Database of Classical Scholars. A member of the Harvard College class of 1888, Gleason taught in the Boston area for a full 50 straight years (1889-1939)—all but seven of them at Roxbury Latin. He never took a sabbatical. Gleason authored or co-authored ten widely-used texts on Greek and Latin for course use, nine of them in the period 1894 to 1905. These included The Gate to the Anabasis (1894), the Cyropaedia of Xenophon (1897), and Greek Prose Composition (1905). From 1907 until his retirement in 1939 Gleason served as associate editor for Classical Journal, for which he penned dozens of short entries. He also spent a year leading the Classical Association of New England as its President (1924-1925). For the school year 1932-1933 he was Acting Headmaster at Roxbury Latin.

But it was for his inspired teaching that Clarence W. Gleason has been best remembered. Wrote the old Boston Traveler [now Boston Herald] of Gleason’s death in 1942: “He had that flame of enthusiasm without which the schoolmaster’s high calling becomes a barren drudgery. That flame he could transmit to youngsters in his classroom, and thus make Caesar an adventure, Cicero an intellectual challenge, Virgil an emotional experience. Clarence Gleason made the classics live for the boys of Roxbury Latin School.”

And let us not forget Gleason’s teaching of Xenophon. His institution of “Exelauno Day” on March 4th became in his lifetime a Roxbury Latin tradition, and has spread from there throughout the United States—with spirited celebrations, for instance, at Southwestern University in Georgetown TX, or by any number of chapters of Eta Sigma Phi, the national Classics honor society.

How could this all be so? John Moynihan of the Swampscott Patch has told the story better than anyone. “On March Fourth every year, [Gleason] decreed that there be no homework for students of Greek and established it as an annual Greek and Latin declamation day. David Taggart Clark [Roxbury Latin class of 1889, Harvard class of 1892], professor of economics at Williams, endowed declamation prizes which students have eagerly competed for on March Fourth since 1957.” Roxbury Latin students have been so ubiquitous in the world of Classics that it was just a matter of time before the school’s time-honored March 4th festival caught fire elsewhere. 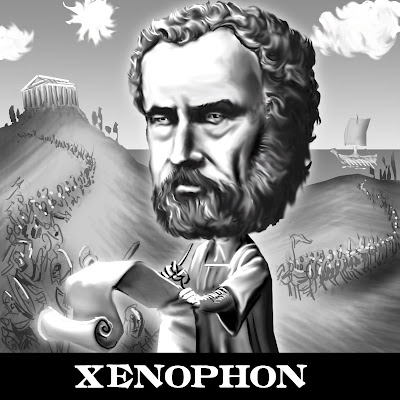