Two hundred forty years ago—in December 1776, during the American Revolution—the British sited their artillery on this hill during their occupation of New Brunswick.

Fifty years ago—in 1966—Hertzog inexplicably fell victim to the wrecking ball, and an architectural monstrosity, Zwemer Hall (charitably known as “The Dixie Cup”) rose up on Holy Hill in its place.

And now on 6 September 2016, on this same elevation Rutgers has opened its $116 million, 175,000 square-foot Academic Building. It serves as new home to its School of Arts and Sciences and a number of SAS departments—including Classics. It marks the first new academic facility on the Rutgers College Avenue Campus since the 1960s. 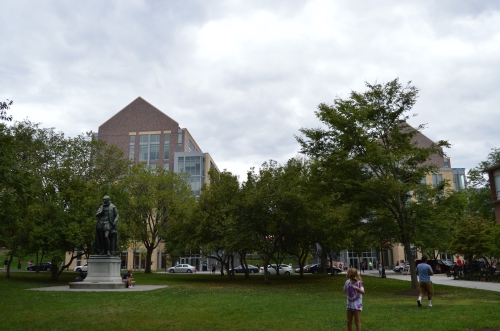 For Rutgers Classics, it meant saying goodbye to its home (of half a century or so) in the Ruth Adams Building of beloved Douglass Campus, and setting up shop at the following new address:

The completion of the impressive brick and limestone Rutgers Academic Building forms an important part of the College Avenue Redevelopment Initiative that broke ground in 2013.

The Rutgers Academic Building—which is really two large connected structures—contains ultra-modern lecture halls, large and small classrooms, informal learning spaces as well as conference rooms and faculty offices. With a seating capacity of 2500, our new facility will see 20,000 students passing through its halls each day.

From the vantage point of Classics, located in spacious and light-filled quarters on the sixth floor of the west part of the structure, the 360 degree views of New Brunswick and the Raritan River are spectacular.

Then there is the landscaping. A stepped pedestrian passage between the two wings of the building connects the Voorhees Mall at Seminary Place to the northern end of the New Brunswick campus, creating some enticing outdoor spaces. Oh, and did we mention there is a cafe?