The last months have been an academic whirlwind for Rutgers Classics PhD candidate Emmanuel Aprilakis, now in his fourth year in our program. This past summer and fall have taken Emmanuel to the UK (twice) as well as Slovakia and Greece, for research, paper presentations, and more. But we’ll let Emmanuel Aprilakis tell the whole, intriguing story in his own words…

“I was fortunate enough to spend a portion of this past summer from June into July as an Academic Visitor at the University of Oxford. The main purpose of this endeavor was to undertake pre-dissertation research that would feed directly into my ensuing dissertation proposal to be submitted at Rutgers this fall. While there, I also presented a paper at the Graduate Workshop in Ancient Greek and Roman Music, which took place on June 29that the Ioannou Centre, which houses the Faculty of Classics at Oxford.” 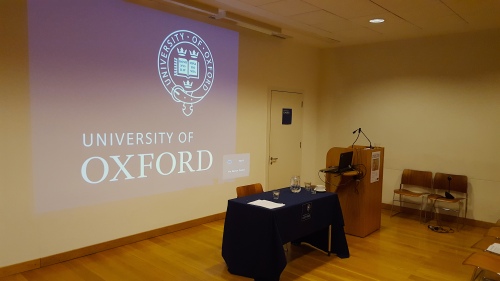 “Appearing on the panel treating music and drama, my paper, entitled “Athena’s Θεσμός: Sound, Assonance, and Speech Acts in Eumenides 566-73,” dealt with Athena’s ordinance, which is central to Aeschylus’ Eumenides, the culmination of his peerless Oresteia trilogy. As she presides over the very first trial there, Athena herself intermittently explains the institution of the pioneering law court on the Areopagus. My piece sought to highlight the sound imagery, assonance, euphony, and speech acts employed by Athena in this pivotal speech in the play.” 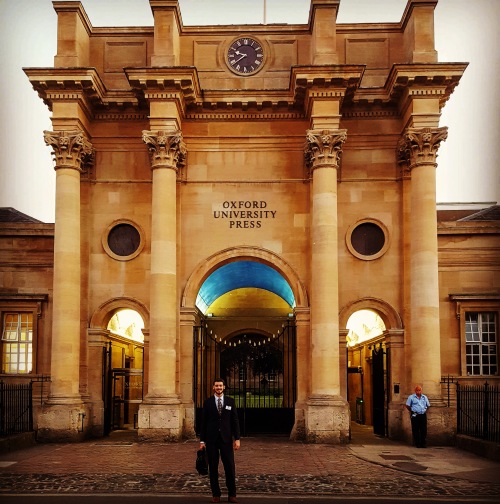 Outside of Oxford University Press after having presented my paper

“I was happy to receive such a variety of feedback, which made for a very fruitful conversation later on with both Professor Armand D’Angour, who gave the keynote address, and Professor Felix Budelmann, who chaired my panel. All in all, I am grateful to Spencer Klavan, Harry Morgan, and James Lloyd, who jointly organized this excellent conference and also a wonderful dinner, where I was able to chat further with Oxford faculty, such as Professor Scott Scullion.”

“I also luckily ran into Professor Oliver Taplin, whose work on Athenian stagecraft has spurred many of my own ideas about imagining dramatic performance.”

“Thanks to a connection that goes back to my undergraduate days at Hunter College, I was very honored to be put in touch with the legendary David Raeburn of New College at Oxford, who has been producing and directing Greek plays since 1947. I was treated to a fantastic lunch up in the elegant faculty dining hall of New College, where I met Professor Robin Lane Fox, who is Emeritus Fellow there.”

“Thereafter, David Raeburn not only attended my talk, but graciously invited me to dinner at his home, where we discussed our views on ancient theater performance, and he shared a plethora of anecdotes and photos of performances that he has put on over the course of eight consecutive decades. It was incredibly valuable to hear about the approaches and the challenges that directors face from perhaps the most eminent director of ancient dramas in the world, and I was overjoyed to browse sections of his newly published Greek Tragedies as Plays for Performance alongside the author.

David Raeburn showing me around the Cloisters before the New College Chapel, where he has recently staged some of his productions

David Raeburn reading from his book after preparing a delightful dinner

“Our conversation was so abundant that we actually had a fourth meeting just before I left Oxford, on 21 July at the restaurant Loch Fyne, where we enjoyed a fantastic seafood dinner.” 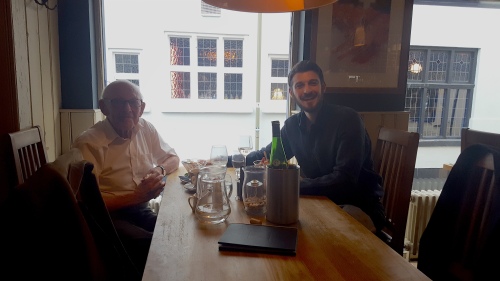 “Thanks to this same connection, via the director of the Macaulay Honors program at Hunter College, Dr. Lev Sviridov, I was also welcomed for a visit to the dignified Rhodes House, where Lev once enjoyed a period as a Rhodes Scholar.”

“The overall extravagance of the city of Oxford that is remarkable to the day-visitor is so ubiquitous that it threatens to be taken for granted by the visitor who stays for an extended period. But, I daily took advantage of the stunning views afforded both by nature and nurture via regular strolls through the surrounding colleges, neighborhoods, and parks.” 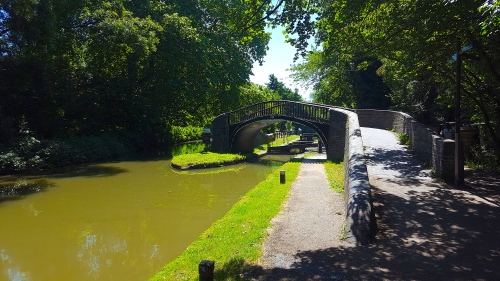 Outside of Magdalen College, the view towards the grand bell tower

The Hertford College Bridge, popularly referred to as the Bridge of Sighs

The Sheldonian Theatre, sitting between the Clarendon Building and the Museum of the History of Science, complete with classically inspired herms

“My indoor activities were indeed no less rewarding, as I thoroughly utilized the services available to me as an Academic Visitor. I split much of my time between the Old Bodleian Library and the Sackler Library, which is mainly devoted to classical works. The level of research that one can conduct in this network is second to none other. And though it was to be expected, it was truly made manifest to me while there that the libraries of Oxford are a place that many people in our field wish to exploit, if they have the opportunity.”

“I ran into fellow graduate students from back in the States, such as Bill Beck of the University of Pennsylvania, whom I had first met on an airplane on my way to the SCS in Toronto in 2017. I also happened to cross paths with Rutgers faculty member Gary Rendsburg, Chair of Jewish Studies, whom I later accompanied on a trip to the unparalleled Oxyrhynchus papyri collection, which is housed in the Sackler. There I was able to handle and closely examine dramatic texts of Sophocles, Aristophanes, and Menander from as early as the second century.” 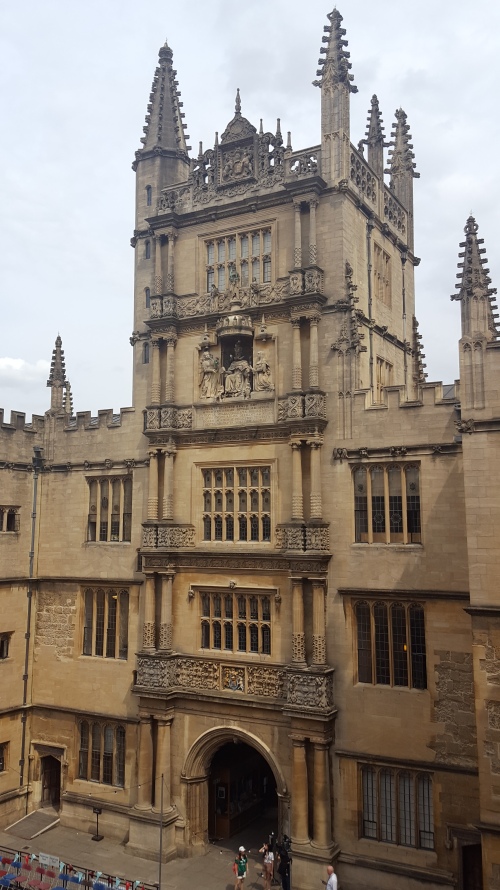 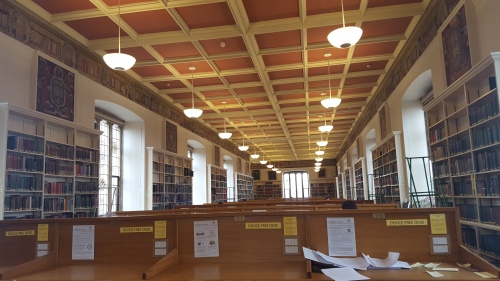 View from my desk inside the Old Bodleian Library 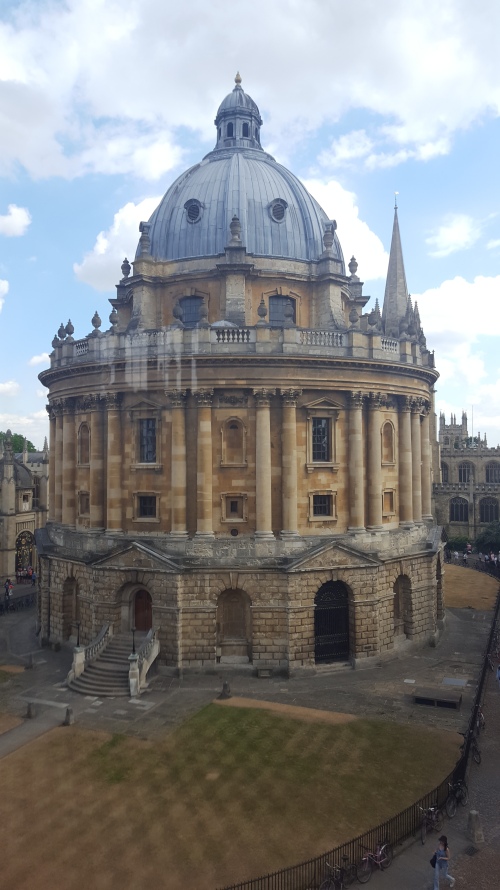 View from my desk out the window towards the Radcliffe Camera 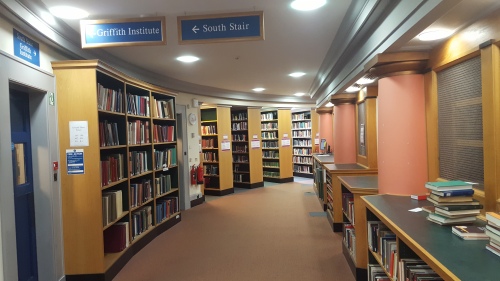 “In addition to the regular work undertaken in the libraries, I was thrilled to make use also of the collection at the Ashmolean Museum and its detailed catalogue. In thinking about my dissertation topic of choral performance, my main search there was for depictions of chorality in Athenian vase-paintings.” 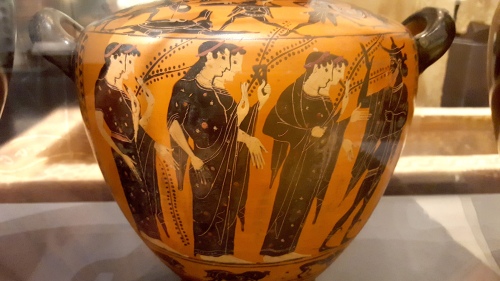 Ashmolean Museum (AN 1879.161): Athenian black-figure hydria of about 530 BC with Hermes acting as leader of a group of six goddesses or nymphs arranged in two lines

“Aside from my varied researches, I was also able to enjoy the vibrant social atmosphere that the town of Oxford has to offer. Of course, for much of my visit, the 2018 World Cup had taken the country by storm, as England advanced to the third-place game, where they fell to Belgium, and it was a blast to watch each match in the local pubs.”

“I also took the opportunity to savor the culinary side of Oxford, which is indeed impressive. But, it was the people I encountered who were a large part of what made my trip so thoroughly enjoyable. From international students who were there learning English to seasoned academics in other departments, the community I encountered at Oxford was an absolute pleasure.”

Even when England wasn’t playing, my international group of Oxford friends were still more than interested to catch the games

Spending my farewell evening with new friends Victor Lal of the Oxford Centre for Global History (right), Lion König of the Department of Politics and International Relations (middle), and Manika Premsingh, founder of Orbis Economics (left)

“After my time at Oxford was up, I had a stop in Slovakia, where I spent time hiking in the High Tatras, the highest mountain range in the Carpathian Mountains, on the northern border with Poland.” 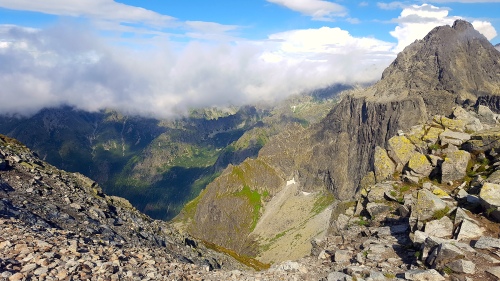 The view from atop Mt. Rysy, the highest point in the High Tatras, rising over 2,500 meters above sea level 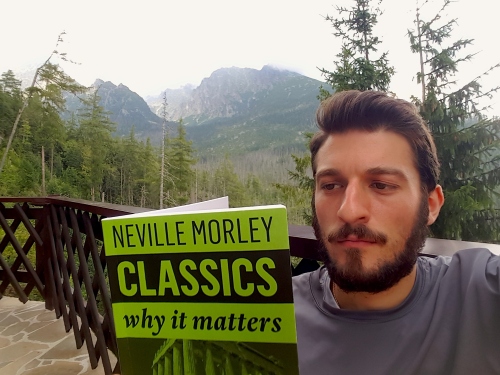 “Thereafter, I travelled through Greece visiting both friends and family.”

The view from my father’s home village of Nikia down to the Stefanos crater, the largest of the volcano that formed the island of Nisyros. The etiology for Nisyros and its volcano goes back to the Gigantomachy, when Poseidon broke off a part of Kos and crushed the giant Polybotes. This story is immortalized on Parthenon metope east VI

“Having returned to Rutgers to teach in the fall, I took a trip back to the United Kingdom in just the third week of the semester for a conference at the University of St. Andrews in Scotland. This conference, entitled “Athletics and Identity in Ancient and Modern Cultures,” took place on 20-21 September and featured a splendid array of papers from some of the most prominent scholars of athletics in the field. My paper, entitled “Ancient Athletics and Jewish Identity: From Maccabees to Josephus,” interrogated the monolithic view of complete Jewish indignation against athletics in the Second Temple Period by using the evidence of Philo.”

St. Andrews University: inside the elegant Parliament Hall, where I presented my paper

“At this conference, I was happy to run into a familiar face in Mali Skotheim of the University of Wisconsin-Madison, to hear papers from the likes of Professor Stamatia Dova of the Hellenic College and Center for Hellenic Studies, Professor Heather Reid of Morningside College, and Dr. Sofie Remijsen of the Universiteit van Amsterdam, and to make the acquaintance also of Dr. Salvatore Tufano of Sapienza Università di Roma and Dr. Sebastian Scharff of Universität Mannheim.”

“Moreover, I must commend Professor Onno van Nijf of Rijksuniversiteit Groningen, who gave a sensationally thought-provoking keynote lecture on festival networks in the Hellenistic and Roman periods. And finally, I feel great gratitude towards Professor Jason König and graduate students Giorgios Mouratidis and Caitlan Smith for organizing such a smooth and welcoming conference at their home campus.”

Fortunately, I also had some time to explore, not only in St. Andrews, but also in Edinburgh, where I am here, taking in the view atop Calton Hill